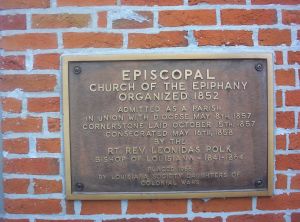 In 1844, Episcopalians in the area gathered for a visit by the Bishop of the Episcopal Diocese of Louisiana, the Right Reverend Leonidas Polk, during which he baptized three adults and three children. According to records kept by the Diocese, Epiphany was established as a mission of the Episcopal church that same year.

Prior to the building of a church structure, a succession of Episcopal priests conducted services for Episcopalians at various locations in the area, including a chapel loaned by the city’s Methodist congregation. In 1854, a local plantation owner, Harvey Hopkins, donated land for a church to be built. The cornerstone for the church was laid in 1857. Four years after Hopkins donated the land, and with the arrival of the Reverend W.K. Douglass in 1858, the church structure was consecrated. The generosity and service of Harvey Hopkins as Epiphany’s senior warden is noted among several memorial tablets both on the interior and exterior of the church.

During the Civil War, Union General Nathaniel Banks and his troops occupied the church building which was vandalized by the soldiers who mutilated the windows, burned some of the original pews and wrote graffiti on the walls. Historical legend reports that the church was used as a stable for the horses, with the pews used as feeding troughs. The same legend also reports that teeth marks from the horses can still be seen on some of the pews that were original to the church. The church building was also used by troops as a hospital, guard house and barracks for Union soldiers encamped in the area. Unfortunately, during this time many of the early church records were destroyed so legend and oral narratives of area residents and parishioners became vital to preserving the history of the church parish as it survived through its early turbulent years.

After the Civil War, the church interior was restored and enhanced over the years through the generosity of its parishioners and other local residents, including a stained glass window behind the church altar donated by Louis Comfort Tiffany of the Tiffany Glass Company located in New York. According to legend, many women of the church donated their gold jewelry to collect money for the commissioning of a window to become an added focal point with the altar. When the amount collected was not enough, Tiffany graciously donated the window. 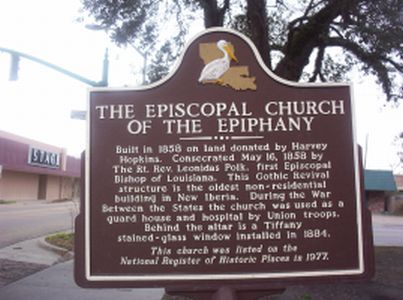 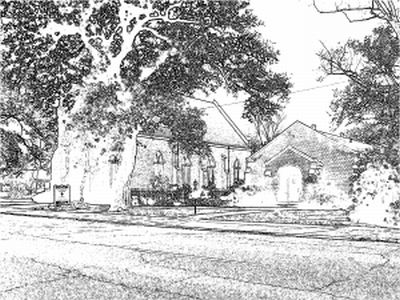 Today, the church property includes a parish hall built in 1951, and other buildings shared with Epiphany Day School which enrolls students from New Iberia and surrounding cities in Pre-K3 through fifth grade. Many students choose to continue their education at the Episcopal School of Acadiana for grades 6-12, located on historical property in the nearby town of Cade.

Located on the corner of Jefferson and Main Streets, the church is the oldest public (non-residential) structure in New Iberia and is on the National Register of Historic Places. It is the oldest Episcopal church building in the Diocese of Western Louisiana.

The Episcopal Church of the Epiphany